An abundance of plant and animal life call the Eno River home, including several rare and endangered species. We work to balance protecting these species and their habitats, while also providing public access to recreation and respite.

Knowledge is essential to growing engagement in environmental stewardship. Join us for an immersive experience along the Eno through our monthly education programs or by booking an exploration for your school or group.

In the meantime, explore the links below to learn more from home! This perennial plant is native to eastern North America, where it grows in deciduous forests and along streams or rivers. The white flowers can be easily identified based on their unusual pantaloon-like shape. Along the Eno, this species emerges in early spring and can often be found within Penny’s Bend Nature Preserve. This perennial grass is commonly found in bottomland forests and along the sides of streams and rivers. This is largely due to the fact that it grows well in moist soils. It forms loose colonies and can be distinguished by its drooping, oat-like flowers on slender branches. Seeds of river oats are consumed by some bird species, as well as white-tailed deer. They also provide shade and cover for small critters living around the Eno. The plant is naturally found on rocky slopes and mountainous forest areas. It thrives in acid soil, preferring a soil pH in the 4.5 to 5.5 range. The plant often grows in large thickets, covering great areas of forest floor. In the Appalachians, it can become a tree but is a shrub farther north. The species is a frequent component of oak-heath forests. In low, wet areas it grows densely, but in dry uplands has a more sparse form. In the southern Appalachians, laurel thickets are referred to as “laurel hells” because it is nearly impossible to pass through one.

In spite of dense urban development nearby, the woodlands of the Eno River are a peaceful haven. The timber industry took away much of the forest up until 1941, but the ridges, slopes and flood plains are once again growing thick with vegetation. Pine, cedar, poplar, maple, dogwood, oak and hickory dominate the area.

Mountain laurel, Catawba rhododendron and ferns grow on the slopes and bluffs. Wildflowers bloom beneath the trees in spring and vines such as greenbrier; grape and trumpet flower are part of the backdrop of natural beauty at the park. Great blue herons are large wading birds that frequently visit the Eno River. There they can be seen standing in the water waiting for prey to swim by, at which point they strike the water with their long, spear-like bills. Although they primarily consume small fish, these birds will also feed on crayfish, aquatic insects, amphibians, reptiles, and even small mammals and birds. Great blue herons are high up in the food chain and as top predators when they are adults. American toads of the Eno use the river in different ways at different points in their life cycle. As tadpoles, they spend all of their time in the water, breathing through their gills and feeding on organic matter like algae, aquatic vegetation, and dead fish. As adults, these toads spend their time on land but require moist areas for their survival. For this reason, toads often stay close to rivers and streams where they feed on insects, spiders, worms, and other critters. The bluegill is a freshwater fish species which can readily be found in the Eno. They spend a great deal of their time hiding among aquatic plants and debris in the river. Bluegills are omnivores that will feed on anything they can fit in their mouth, but primarily consume aquatic macroinvertebrates. During the late spring and early summer, males scoop out nests in the gravel or sand of the riverbottom, which they defend voraciously both before and after eggs have been laid.

Plant communities along the river provide the perfect home for various animals. In the old fields, you can find bobwhite quail and eastern cottontails resting in the weeds. White-tailed deer, raccoons and opossums feed on the fruits and seeds of the hardwood forest. You might even catch a glimpse of a chipmunk, gray squirrel or possibly a river otter.

The birds of Eno River provide a symphony of music at the park. The calls of the red-tailed hawk, great horned owl and barred owl mix with the melodies of various songbirds. Wood ducks, great blue herons and belted kingfishers thrive around the river.

One of the most intriguing animals in the park is the beaver. This resourceful creature was almost killed off in North Carolina due to excessive trapping but is now back in many parts of the state. Although seldom seen, gnawed stumps and tree trunks are tell-tale signs the beaver has been searching for food. The best times to catch a glimpse of the beaver are at dusk and dawn along the river.

Learn more about the rocks and soil that lie beneath your feet. Visit the Geology of North Carolina website for geological tours of the Eno. 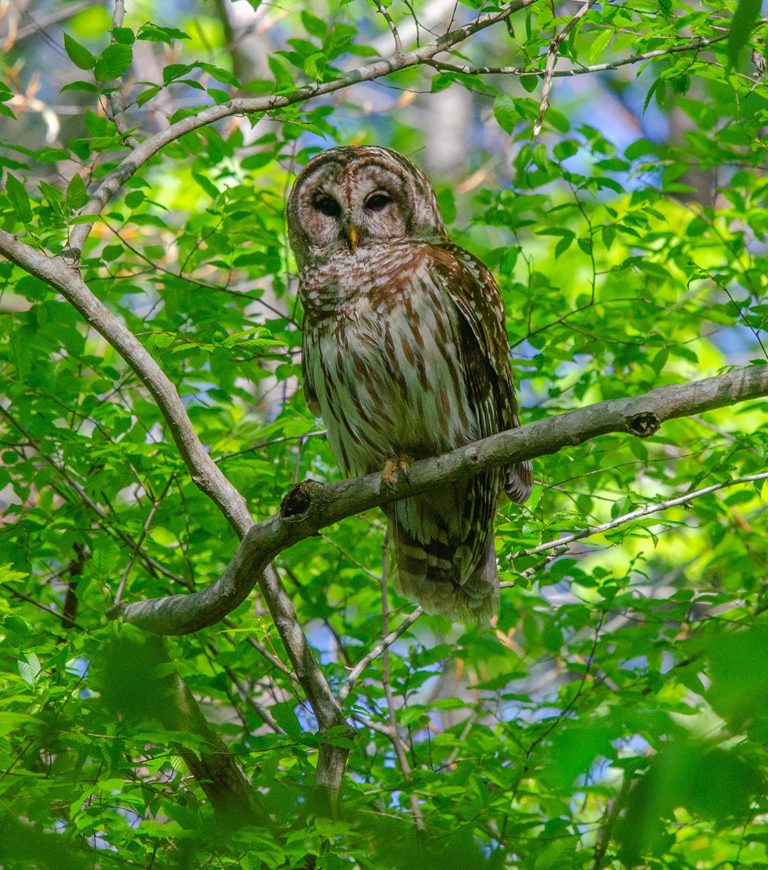