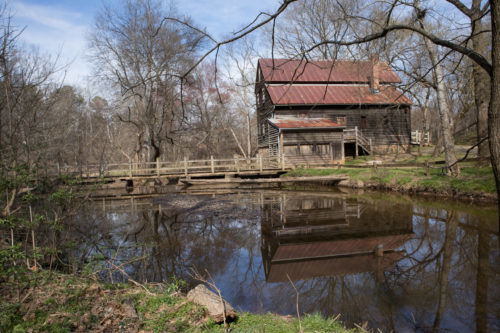 This 404-acre park is located along a two-mile stretch of the scenic Eno River, six miles north of downtown Durham. You can enjoy a leisurely picnic and stroll around the grounds, or take a hike through the woods on one of the park trails. Download Trail Map here. Feel free to bring your canoe or kayak and experience the beauty of the Eno River. The park gates are open daily, year-round, from 8 a.m. – dark. For more information, contact park staff at  (919) 471-1623. For more information on West Point’s events, click here or visit our calendar.

West Point on the Eno, a natural and historic city park, is located along a two-mile stretch of the scenic Eno River. The 404 acres of woods, waters, and wildlife have changed little in the centuries since this area was the home of the Shocco and Eno Indians. This river valley was also attractive to the first white settlers, primarily farmers and millers, who arrived in the 1750’s to earn their livelihood.

The three historic buildings are open 1 – 5 p.m. Saturday and Sunday, April through December. Admission is free. Weekday tours of the buildings can be arranged in advance by calling (919) 471-1623.

West Point Mill
Of the thirty-two mills that once dotted the Eno River, none has held so long and prominent a place in the history of this area as the West Point Mill. Its location at an excellent ford accessible by roads from north, south, and west; its ownership by notable and influential men; the growth of Durham to the south – all combined to give . this particular mill the distinction of having functioned longer (1778-1942) and more prosperously than any other mill on the river. This mill also became the vital center for a thriving community of about 300 families. There was a general store, blacksmith shop, cotton gin, saw mill, and still. In 1839, the mill even became the location of a post office. Because it was the most westerly point on the mail route from Raleigh to Roxboro, the name West Point was given to the post office, to the mill, and to the community itself.

The mill ceased operations in 1942 when a freshet broke the dam across the river, and the building collapsed from old age and neglect in 1973. Through the use of photographs of the original mill, remains of the framing, and the intact foundation, the mill was reconstructed with materials gleaned from other local grist mills. Today the West Point Mill is working again, grinding corn and wheat with water power. Stone-ground meal and flour, along with other items, are sold in the mill’s store.

McCown-Mangum House at West Point
John Cabe McCown, one-time owner of the West Point Mill, built this vernacular, Greek revival farmhouse as his residence in the 1840’s. In 1891, the house was sold to Presley J. Mangum, an early Durham postmaster, who wished to escape the growing town of Durham. The Mangum family occupied the house until 1968.

The restored house features original mantels and woodwork, including rooms sheathed in the original heart-of-pine boards. The house is furnished and decorated in a late-nineteenth century style, with several original pieces loaned by the Mangum family. Surrounding the house is a garden of flowering shrubs, perennials, herbs, and roses, representing the once-extensive gardens of the Mangum family.

Packhouse & Hugh Mangum Musem of Photography
One of the original buildiings at West Point, the Packhouse, once used for handling tobacco, now serves as the Hugh Mangum Museum of Photography. In addition to the permanant exhibit of Hugh Mangum‘s images and equipment, the museum hosts regular exhibits by many of our regions finest photographers.

Amphitheatre at West Point
This secluded area nestled in the woods is the perfect setting for company picnics, festivals, concerts, performances, and other large group gatherings. See the park website for more information.

Picnic Facilities
The large picnic shelter was built to resemble a barn that once stood nearby. Featuring restrooms, a grill, and electricity, the facility accommodates up to 75 people for group picnics and gatherings. The small shelter accommodates up to 40 people and has a grill and drinking fountain nearby. See the park website for reservation information. Numerous picnic tables and grills are located throughout the park and are available for free on a first-come, first-served basis.

Natural Area
The trails, approximately 5 miles in length, lead along the river and through rocky terrain with granite bluffs often covered with mountain laurel rhododendron, and partridgeberry. A variety of flowers, ferns, and shrubs indigenous to the mountains are also found here. A pleasant sequence of rapids and deep waters makes the river popular for paddling. Fishing is permitted; catfish, bream, crappie, chain pickerel, and largemouth bass abound. In addition, the Eno is a prime habitat for the Red-eye or Roanoke bass, a game fish found in only two rivers in the state, the Eno and the Tar.